Dutch Kastenbaum Outstanding Gerontologist Award
The Minnesota Gerontological Society established the Outstanding Gerontologist Award in 1984 to recognize individuals who have contributed to lives of older persons throughout Minnesota. Contributions can be made to the field of aging through practice, research, or academics. In 1998 the award was renamed the Dutch Kastenbaum Award to honor Abraham “Dutch” Kastenbaum.  Kastenbaum was trained as a social worker, and was a champion in beginning service programs for older people. He later became a celebrity with his weekly television show, Senior Citizen’s Forum, which ran for almost 25 years. To honor his memory, the Minnesota Gerontological Society receives nominations each year to recognize outstanding gerontologists.

Nomination Deadline for 2022 Gerontologist of the Year Award is March 11, 2022. Winner announced at the April 2022 MGS Annual Conference.

Nominations are open to all leaders in Minnesota meeting the criteria and are not limited to MGS membership.

Please email info@mngero.org for a nomination form or for any questions.

2022 Gerontologists of the Year:

Sue Humphers-Ginther (Ph.D. Sociology, University of California, San Francisco) is Professor of Sociology, Coordinator of the Gerontology Program, and Chair of the Department of Sociology and Criminal Justice at Minnesota State University Moorhead. Her teaching interests are in the sociology of aging, health/aging politics and policy, medical sociology, research methods and statistics, and grant writing. Her doctoral education was funded by a five-year National Institute on Aging pre-doctoral fellowship in Sociocultural Gerontology at the University of California, San Francisco. She received a Teaching Award from UCSF’s Department of Social and Behavioral Sciences, two Research Awards from the Institute for Health and Aging, and an Outstanding Advisor Award from MSUM. She was a Governor’s appointee to the Minnesota Board on Aging from 2005 – 2014. From 2015 – 2017, she was a member of the Editorial Board and co-Managing Editor for Contemporary Rural Social Work. She has been a member of the Board of Directors of the Minnesota Gerontological Society since 2006 and served as co-President of MGS from 2013 – 2015. 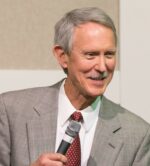 Tom Hyder retired after serving as the Executive Director of the Minnesota Gerontological Society 2014 – 2021. During his tenure MGS doubled its membership, substantially increased participation in monthly educational offerings, and actively advocated for high-quality gerontology related education. Tom has previously served as the Chair of the Minnesota Leadership Council and is a past President of the Minnesota Network of Hospice and Palliative Care. He has a 40+ year career in directing public and non-profit organizations including as Director of Area Agencies on Aging in Oklahoma and Oregon. Currently he serves on the Board of the Stevens Square Foundation, is an active Master Gardener volunteer, husband, and staff for Louie the cat.